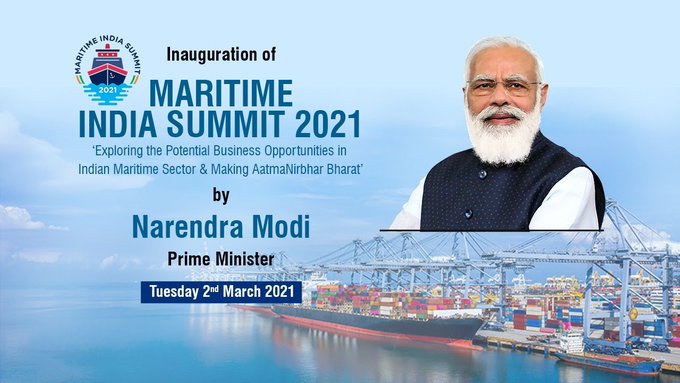 Prime Minister Shri Narendra Modi inaugurated Maritime India Summit 2021’ through video conferencingtoday. Minister of Transport of Denmark Mr Benny Englebrecht, Chief Ministers of Gujarat and Andhra Pradesh, Union Ministers Shri Dharmendra Pradhan and Union Minister of State (I/C) for Ports, Shipping And Watwerways, Shri Mansukh Mandaviya, were present on the occasion.In his welcome address, Shri Mansukh Mandaviya said that the Maritime India Summit is one of the biggest virtual summits in the world, with the participation of more than 1.7 lakh registered participants from more than 100 nations. In this three-day summit, we will have ministers from 8 nations, more than 50 global CEOs and more than 160 speakers which includes 115 international speakers from 24 nations.

Shri Mandaviya further assured all stakeholders in the sectors and investors from across the globe and said that Government of India is all geared up for facilitating and grounding the investments in the maritime sector and our role in the vision of Aatmanirbhar Bharat’. Prime Minister released e-book of  Maritime India Vision-2030’. Maritime India Vision 2030 is aiming to make the Indian Maritime Industry at par with top global benchmarks in next 10 years.

Speaking on the occasion, the Prime Minister invited the world to come to India and be a part of India’s growth trajectory. India is very serious about growing in the maritime sector and emerging as a leading Blue Economy of the world,he said.

Prime Minister noted that instead of a piecemeal approach focus is on the entire sector as one. He informed that capacity of major ports have increased from 870 million tonnes in 2014 to 1550 million tonnes now. Indian ports now have measures such as: Direct port Delivery, Direct Port Entry and an upgraded Port Community System (PCS) for easy data flow. Our ports have reduced waiting time for inbound and outbound cargo. He also informed that mega ports with world class infrastructure are being developed in Vadhavan, Paradip and Deendayal Port in Kandla.

The Prime Minister concluded while inviting the global investors, “India’s long coastline awaits you. India’s hardworking people await you. Invest in our ports. Invest in our people. Let India be your preferred trade destination. Let Indian ports be your port of call for trade and commerce.